This is a playground to test code. It runs a full Node.js environment and already has all of npm’s 400,000 packages pre-installed, including kapok with all npm packages installed. Try it out:

kapok lists no main file and has no index.js, so it can't be directly required. If this is a mistake, please let us know. It may however contain internal files that you can require manually:

Kapok is a simple, static(ish) collapsible tree generator for JS objects (and by extension, JSON). It aims to be easy to use for both developers and end-users, but reasonably flexible where applicable. 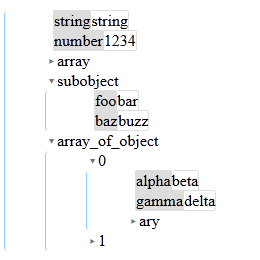 It was written in about a week while recovering from an expensive appendectomy, because I needed something like it and couldn't find anything satisfactory from the googles. As such it is a bit immature and probably has holes here and there, but it has tested stable on most modern browsers.

The recommended way to use Kapok is to simply drop kapok.js and kapok-full.css into your source tree and include them however you please.

If you don't like the default styling or cannot override it to your satisfaction, use kapok-core.css instead, which has the bare minimum CSS for expand/collapse behaviour.

Server-side use is not supported as a DOM is assumed.

Kapok does not make use of UMD, AMD, or any other MD. Instead it takes a steaming dump on best practices and sticks its functionality into the global scope, because that's one less thing that might break a year from now when all the cool kids are using BBQMD instead. If you have a global var kapok that you don't want trampled, you should rename this module's references to it. Yes, all three of them.

This CSS Ninja guide served as a reference for this project. I used Keith Elias's fiddle as a starting point for styling.