This is a playground to test code. It runs a full Node.js environment and already has all of npm’s 400,000 packages pre-installed, including mrpas with all npm packages installed. Try it out:

Or grab the code from the repository and include it in your project.

Instantiate a Mrpas object by passing it the map dimensions and a callback for determining map cell transparency:

Compute the field of view for any set of coordinates by calling the Mrpas#compute() method and passing it the origin coordinates, FOV calculation radius and two callbacks: one for determining whether a call has been marked as visible, and the othe for marking it as visible:

To calculate the FOV on the entire map, regardless of radius, you may pass Infinity as the radius value. Just remember that the transparency callback (the one passed to the constructor) will need to account for this, returning false when a cell outside the map is checked.

Should your map change dimensions, you can inform Mrpas about it by calling Mrpas#setMapDimensions():

MRPAS includes a TypeScript declaration file. It can be used in TypeScript projects without additional typings:

To visualise this, let the following be a 2D grid of 20 by 20 points. The character @ represents the field of view source, # characters represent obstacles. Cells with yellow background are in the source point's field of view: 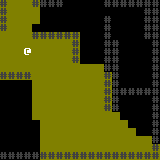 This algorithm was conceived in the year 2008 for the purpose of being used in a roguelike game. To this day, roguelikes remain the focus of MRPAS.

The algorithm was originally written in C and was included in the roguelike library libtcod. It also contained a C++ wrapper.

Since 2008, MRPAS has been implemented in various languages, and has been successfully used in numerous roguelike games.

MRPAS is in that regard restrictive: it allows far less points into the FOV, resulting in a more natural-looking shape of the field of view.

A FOV algorithm is considered symmetric given that the following is true:

Considering the mathematics behind determining the FOV, the line of sight from A to B will be computed differently than from B to A. This results in symmetry artifacts, e.g. points A and B where only one can see the other. 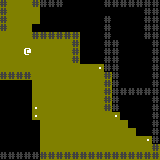 On the above map, 1.6% of all points not containing an obstacle are asymmetric.

The percentage of asymmetric points is within the range of single digit numbers, depending on the map layout. An "outdoor" map with scattered single point obstacles will always contain the most symmetry artifacts.

For comparison, here's an "outdoor" map with 3.9% asymmetric points: 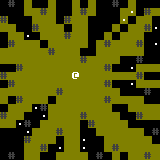 MRPAS was written with performace in mind. It processes as few points as possible, discarding the ones obviously out of FOV. Since raw numbers, such as FOV computations per second, are meaningless without context, suffice it to say that MRPAS tends to match or outperform all popular FOV algorithms.

FOV images have been generated by FOV Torture Chamber.