This is a playground to test code. It runs a full Node.js environment and already has all of npm’s 400,000 packages pre-installed, including seethru with all npm packages installed. Try it out:

Your HTML5 video source is re-rendered into a canvas-element, adding the possibility to use transparencies in your video. Alpha information is either included in the video's source file (moving) or in a seperate <img>-element (static).

The package also ships with a simple CLI tool for automatically converting your RGBA video sources into the correct format.

Native Support for VP8/WebM-video with Alpha Transparencies has landed in Chrome quite a while ago, so ideally other browser vendors will catch up soon and this script becomes obsolete at some point. You can see the article at HTML5 Rocks and read the discussion about how to use seeThru as a "polyfill" for more information.

Alternatively, use the version(s) in /dist.

This approach is a cheap hack! Due to the lack of alpha support in HTML5 video it is one of the few ways to use video with alpha, so it might be the only viable option in some cases, but please don't expect it to work like a charm when processing 30fps 1080p video (or multiple videos) on an old machine with 39 browser tabs opened. Test your usage thoroughly on old machines as well and if you're not satisfied with the speed, maybe think about using a purely native solution. Also: the mobile support of this approach is very limited.

In default configuration the script assumes that the alpha information is added underneath the original video track (in the exact same dimensions: a video of 400x300 target dimensions will have a 400x600 source file). The alpha information should be a black and white image, with white being interpreted as fully opaque and black being fully transparent (colored input will be averaged).

For optimal results the color channel should be un-premultiplied. (see the Wikipedia article on Alpha Compositing for more info on what that is all about). If you need a tool to un-premultiply your imagery you can use Knoll Unmult which is available for quite a lot of packages. If there is no way for you to supply unmultiplied sources, you can use the unmult option, that comes with a severe performance penalty due to un-premultiplying at runtime.

Note the jagged edges in the color channel(s) due to un-premultiplying: 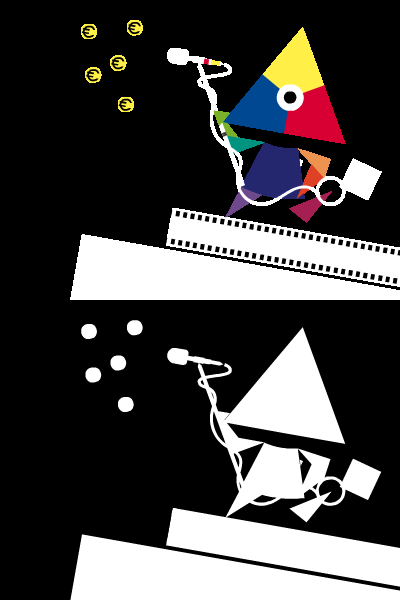 put over a greenish/blueish background results in 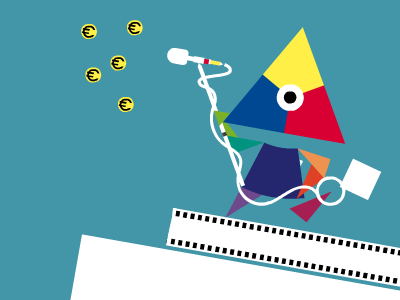 It is also possible to source the alpha information from an <img>-element. The script lets you use either the luminance information of the RGB channels (i.e. the image) or the image's alpha channel (see options for how to choose). In case the image does not fit your video's dimensions it will be stretched to fit those.

To use the script include the source:

and then pass your video element (either a selector or an actual DOMElement) and your options to seeThru.create(el[, options]):

If you specify dimension-attributes for your video, they will be considered, in case they are left unspecified, the dimensions of the source file will be used (video with alpha included will of course turn out to be halved in height).

For testing you can download and use the example videos in the repo's media folder.

There are a few options you can pass when building an instance:

On the returned seeThru-Object these methods are available:

If window.jQuery is present the script will automatically attach itself to jQuery as a plugin, meaning you can also do something like:

If your jQuery is not global (AMD/browserify) but you still want to attach the script as a plugin you can use the attach method exisiting on seeThru.

The package ships with a CLI tool (seethru-convert) that can prepare your video sources for you. Pass a video with alpha information (Animation-compressed .movs should work best here - also make sure the video actually contains information on the alpha channel) and it will automatically separate alpha and RGB information and render them side by side into the target file.

To install the CLI tool globally:

To use the script you need to have ffmpeg and ffprobe installed. The executables needs to be in your $PATH (%PATH for Windows). Alternatively you can pass overrides for the executables used using the --ffmpeg-path and --ffprobe-path options.

Now you are ready to go:

Ideally you should be doing this conversion on your uncompressed / high-quality video source once, and then convert the output into whatever files you need (mp4, ogg et. al.) afterwards.

You can also use standard video editing software to prepare the sources. This walkthrough shows how to do it using Adobe After Effects.

Put your animation with alpha in a composition: 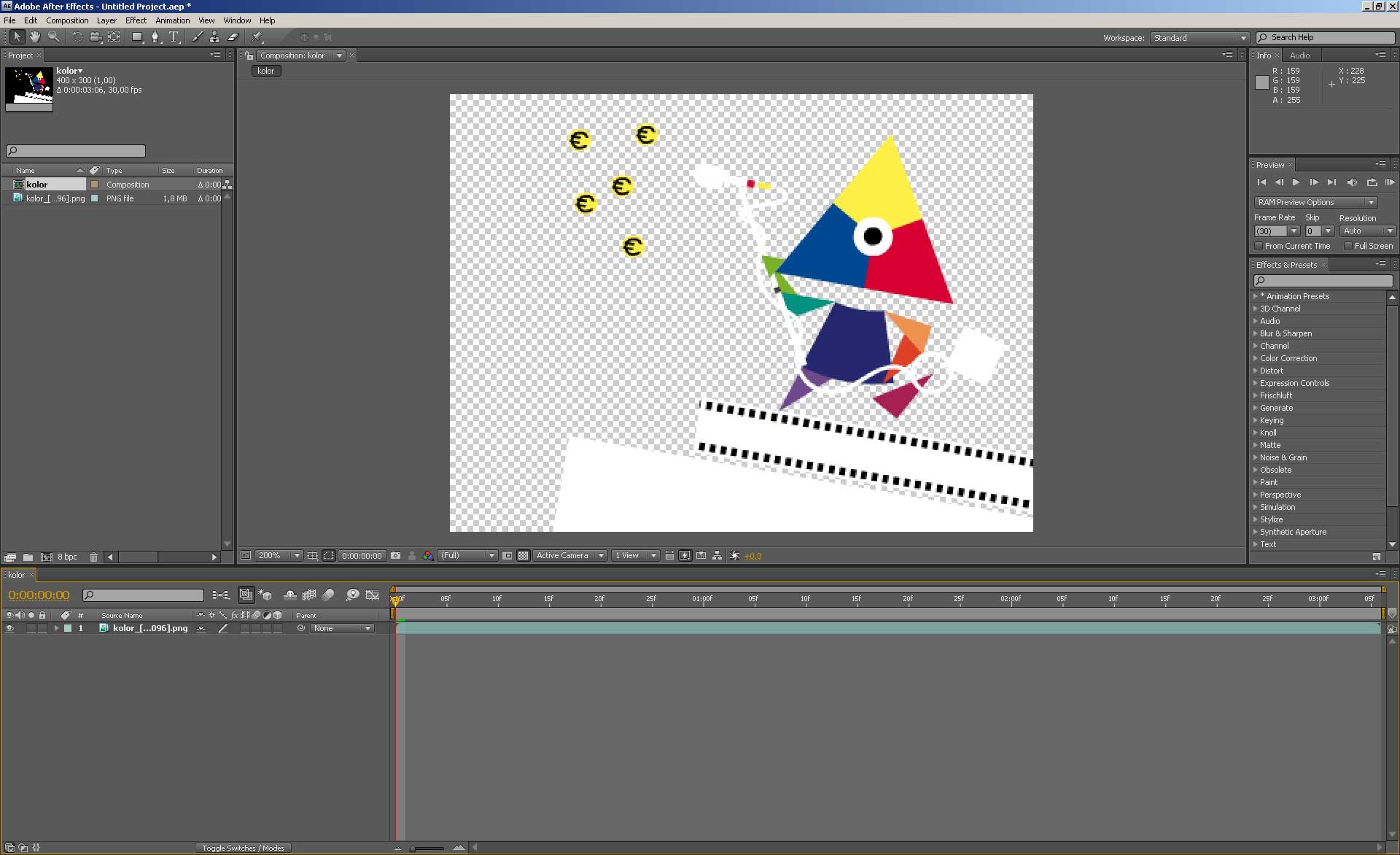 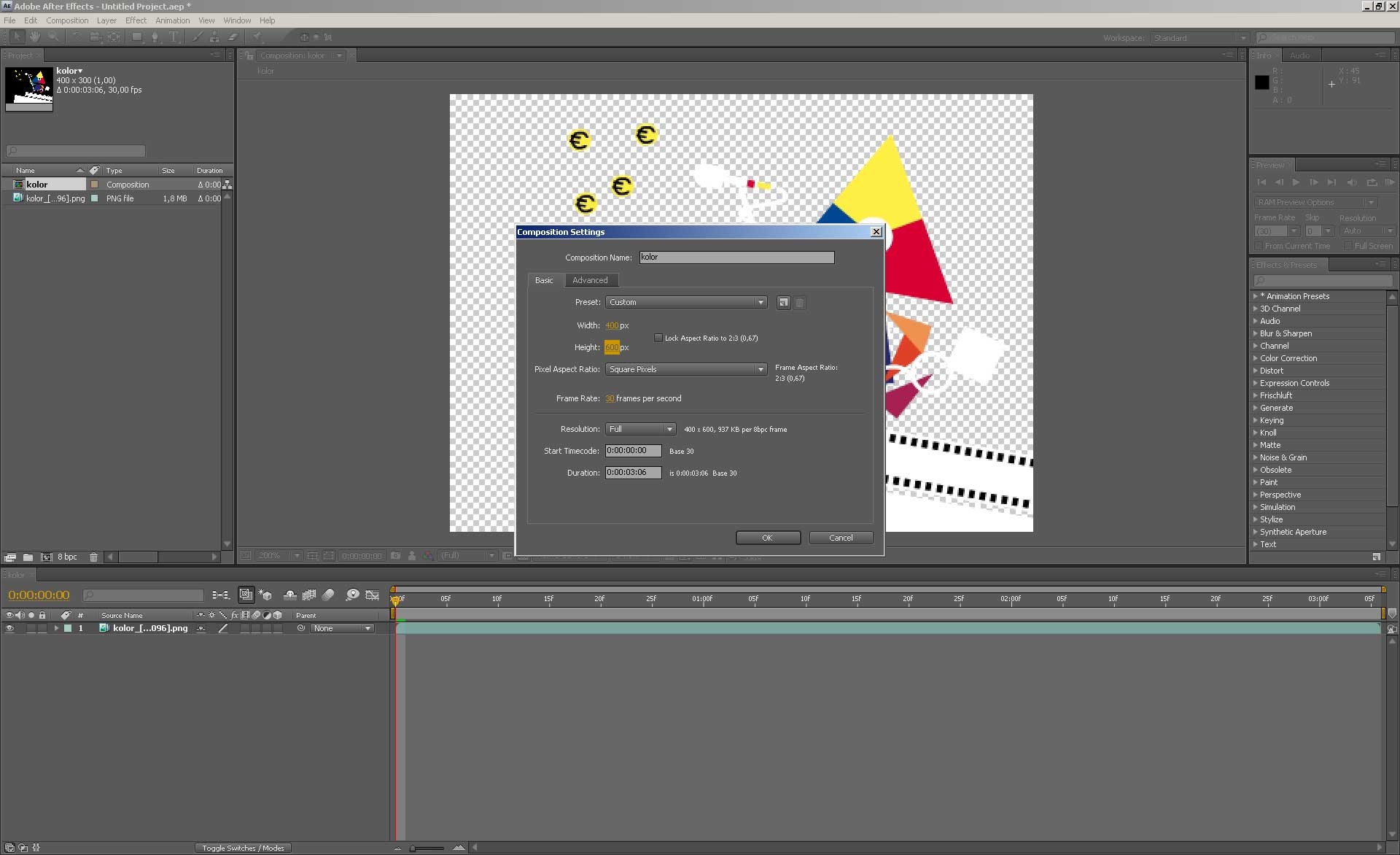 Duplicate your footage layer, align them, and use the second instance as Alpha Track Matte for a white solid: 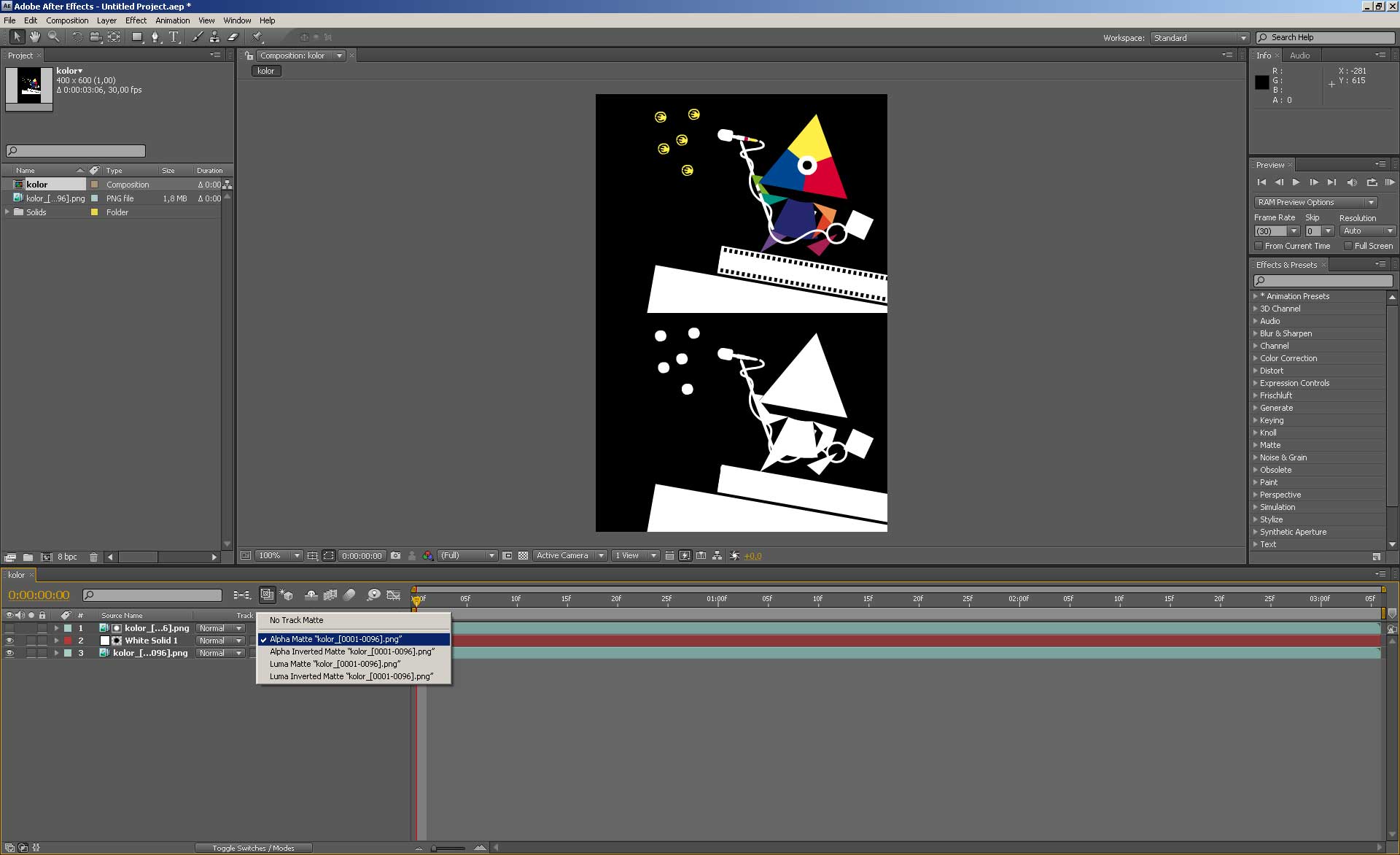 Make sure you are using an unmultiplied (straight) version of your color source: 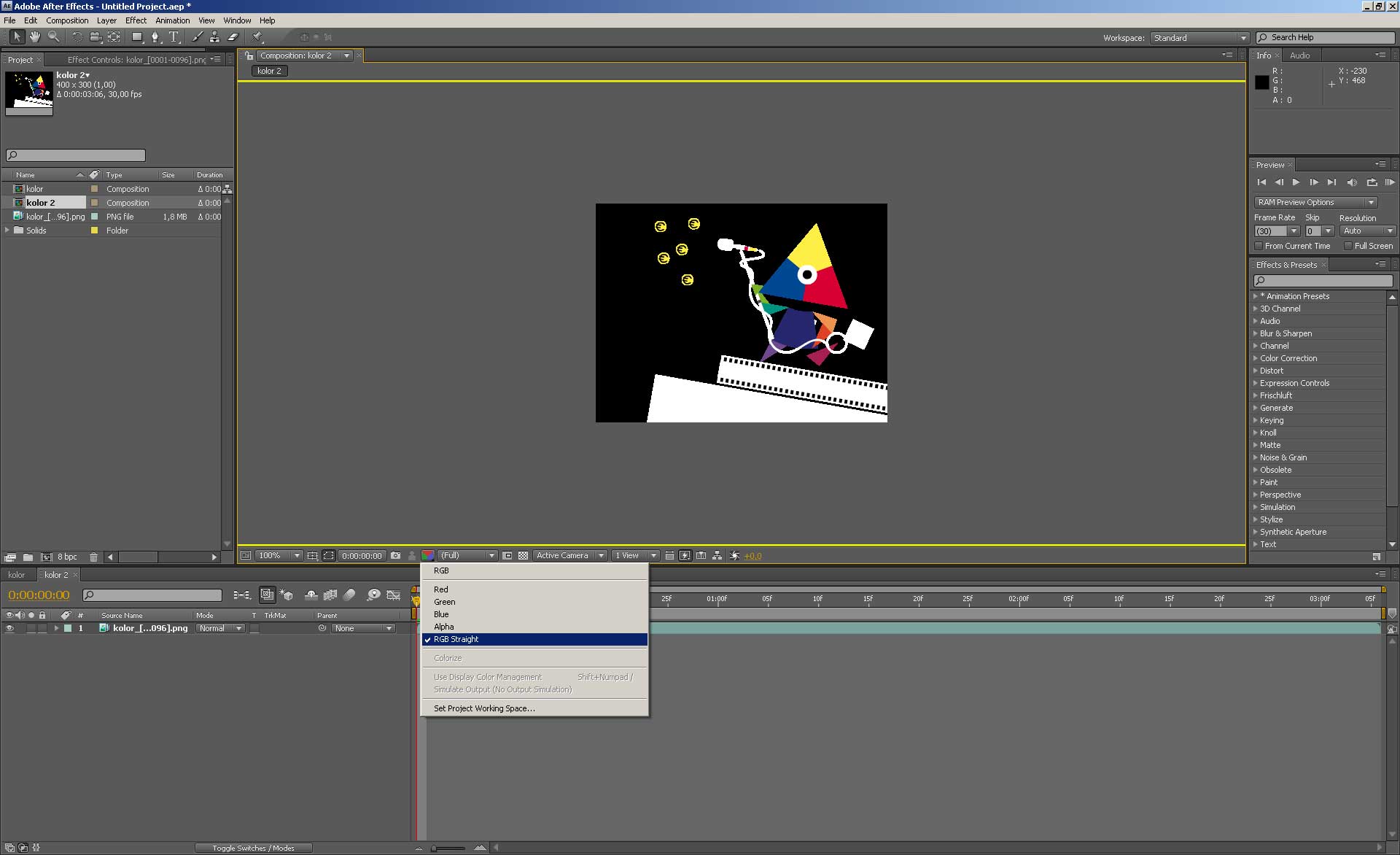 Note that the canvas API is subject to cross domain security restrictions, so be aware that the video source files have to be served from the same domain (i.e. if the document that is calling seeThru is on www.example.net the video files have to be requested from www.example.net as well), otherwise you will see a DOM Security Exception. Also note that this also applies to subdomains, therefore you cannot mix www and non-www-URLs.

This can be worked around when using CORS or by using Blob URLs:

Binding mouse events to your video

To mimic a behavior as if the original video was still visible it will echo all mouse events fired by the canvas representation.

Support for mobile browsers is patchy due to some forcing any video to open in an external player or requiring user interaction. As of iOS 10, a video will work with seeThru if:

In any case you will need to add the playsinline attribute to the <video> tag. If a video has audio, adding the muted attribute will enable playsinline.

The script is tested on Chrome, Firefox, Safari, Opera and IE 9.0+.
See caniuse.com for browsers that support <canvas> and <video>

All source code is licensed under the MIT License, demo content, video and imagery is available under CC-BY-SA 3.0

Thanks to Jake Archibald, who had the original idea for this approach, Kathi Käppel who designed the lovely Mr. Kolor from the demo and Sebastian Lechenbauer for making fun of my git dyslexia.