This is a playground to test code. It runs a full Node.js environment and already has all of npm’s 400,000 packages pre-installed, including tanglestash with all npm packages installed. Try it out:

IOTA meets BitTorrent: An algorithm to persist any file onto the tangle of IOTA

Check out my other project tanglesta.sh here on GitHub which implements this module into a full-blown desktop app available for Windows, macOS and Linux.

I really like the idea of the tangle of IOTA and I think that this cryptocurrency has a bright future. I run a full node myself and want the idea to succeed. The more I messed with IOTA, the further this idea formed in my mind to use the 2187 trytes of each transactions signature to store any data on the decentralised tangle.

This module can persist any string or even files directly onto the tangle via creating a torrent-esque chain of transactions that reference other transactions holding the data while also referencing their direct predecessor in the chain. That way, this module can also retrieve any data that was persisted beforehand by just passing the 'entry-hash' into it, which is the first transaction hash of the created chain. The data can be optionally encrypted with a secret via AES so that even if someone gets hold of an 'entry-hash', the data will still be illegible. Data is stored as a Base64 string and files will be automatically encoded if passed into the algorithm as well as decoded if retrieved – no prior conversion of the file needed.
Here is a diagram of the data structure I came with for this project: 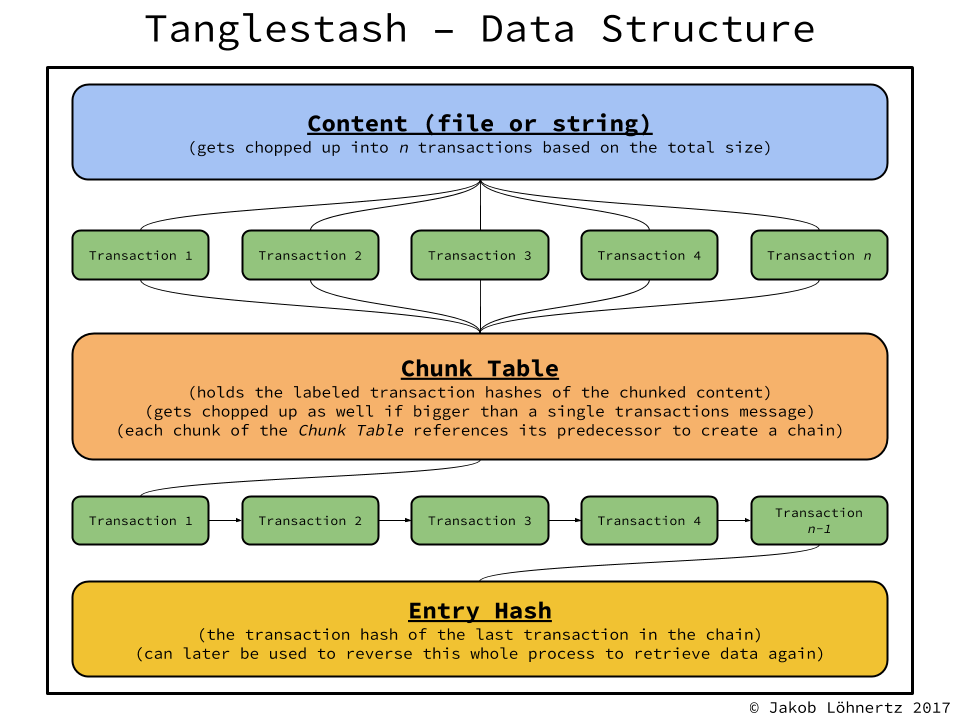 I know that primarily the persisting to the tangle is painfully slow compared to a traditional HTTP upload.
Keep in mind though that this project is more of a proof-of-concept rather than a finished product.
The reason that it takes so long is mainly the current speed of the PoW, which might get faster in the future with new techniques.

Additionally, it is important to note that this module just works with Node.js version 8 owing to the fact that a dependency is currently not functioning under version 9.

First off, create a new instance of the modules class

with the following arguments:

Retrieves data that was persisted onto the tangle in the past.

Persists data onto the tangle.

Retrieves a new valid IOTA wallet address based on this.seed.

Returns all the marky entries used to time the main processes. If you've never used marky before, learn more about it here.

If you like this module and want to support it, you can of course donate some IOTA 😊
QIFKUOEQBCEV9NKFWDBTQYBHLFFORLVKDQSYDSZQQMKTCBLBFDQMJWIOUDH9DLZXVKGNQGKLSAJCQQMEDESLCTHGZD